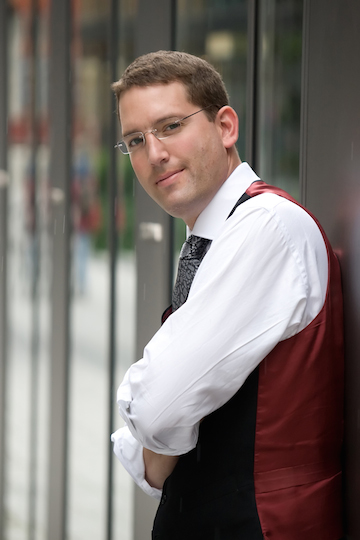 An early start in the wine trade

Munich-born Gregor Drescher was commercially authorised at the age of 18, when he registered as a wine merchant and broker focusing on retail and wholesale wine trade and consulting. Already during these early years Gregor became renowned for his presentations on Brunello di Montalcino. While developing his ﬂourishing wine trading company in Günzburg and Munich he studied economy at the University of Augsburg and law at the University of Mainz before deciding to devote himself fully to the business of wine.

Gregor has been one of the independent head tasters and writers for press agency VinVinoLife since its inception in Munich in 1992. As of 1995 he has been head taster, responsible for all tasting results, and managing editor, charged with the content of all wine publications. In 1996 Gregor was honored with the Destillata Trophy for Journalists. In 1997 Gregor managed the takeover of Redaktionsteam Luckau, Munich, and its integration into VinVinoLife. As managing editor he attends all important international wine trade fairs in, among others, Düsseldorf, Brussels, Verona, London, Bordeaux, New York, Hong Kong, Tokyo and Melbourne, and represents VinVinoLife at international wine conferences. He was managing editor and head taster of UNFILTERED, their independent newsletter, from 2001 to 2007. Gregor was jury member of the Concorso Enologico Internazionale in Verona, the Concours International des Vins et Spriritueux in Bruxelles and the International Wine and Spirits Competition in London, where he was the founder member of Club Vinopolis.

As a wine critic Gregor visited up to 200 wineries, rating some 6 000 wines per year. His ratings and tasting results were published in specialist and general media and featured in his numerous TV performances. His regular presence in the international wine world as well as all the important New World countries brought him widespread acclaim. He is considered an expert of the South African and Californian wine industries, to name just two. In Bordeaux he has tasted more than 600 wines per year en primeur since 1997, making him one of the most active and constant individual tasters and critics on Bordeaux wines.

Gregor conducted several lectures at the University of Stellenbosch in South Africa where he was also responsible for their ﬁrst international wine marketing course. He played a leading role in the seminar cooperation between the Wine Society of the École Hotelière in Switzerland and Germany’s Hotelfachschule in Pegnitz.

In 2002 Gregor became manager of the newly founded VinVino GmbH that took over the seminar portfolio from VinVinoLife, overseeing all seminars for enthusiasts, professionals in the hospitality and gastronomy trade, and food chemists. For these VinVino Wine Seminars Gregor invented unique multimedia wine evenings which were attended by more than 15 000 visitors over 10 years. Due to his global experience and extensive knowledge he was one of the most sought-after speakers – particularly for the exclusive incentive events, and wine seminars for industrial clients, consulting companies and events agencies. All the while, Gregor continued in his capacity as wine critic and keeps in constant contact with the most important international winemakers and enological institutions.

In 2006 Gregor was appointed project manager and wine expert of the new Süddeutsche Zeitung Vinothek, a unique wine distribution project with a powerful mass media base. Gregor was not only solely responsible for selection but also developed new wines with leading international producers. From 2009, for VinVino Consult, he started consulting on high-end wine production on a global scale.

In South Africa, between 2008 and 2009, Gregor was to develop a winery, 4G Wines, from scratch. He produced “Private Preview 2009” and in 2010, the “G.” – one of the ﬁrst cult wines, or so called “ﬁrst growths”, of the country. This wine bearing Gregor’s initial was incontrovertible proof of what can be achieved in a classical New World wine region when implementing all available knowledge of great winemaking from the best producers of the old world; without compromise of any kind. These experiences prompted his decision to reduce his activities as a wine teacher and wine critic and to concentrate on the production of extreme wines under diverse climatic conditions.

To further develop “extreme” winemaking techniques, in 2010 the Drescher family selected a historic wine cellar in Roquebrune sur Argens called “Cave de la Petite Révolution”, as home for their viticulture and winemaking experiments. From this micro-production in France Gregor has released three handmade luxury wines: “Visionnaire”, the grand vin in balance of concentration and elegance, “Salaux” as the symbol of wild power, and with a big smile, “la g.” as the ﬁnal revolution. Based on the expression Unique S.A.R.L. house, Luxembourg, Gregor went one step further. In South Africa in 2012/13 he launched the wines “Book XVII” and “Black Lion” which were to achieve even higher ratings and awards than the “G.”

After the foundation of La Petite Révolution Collection, Gregor presented the ﬁrst cold climate project, “Redgranite” (maiden vintage 2011) with Kurt Angerer in 2014. The trilogy of “Visionnaire”, “Salaux” and “Redgranite” reﬂects the essence of Gregor’s wine expertise and passion.

Gregor is currently the manager of La Petite Révolution Collection and managing editor of VinVinoLife press agency. He lives in Germany, Austria and France.